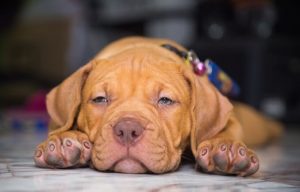 We often think of exercise only as a health issue, but it has significant day-to-day effects on a dog’s behavior as well. Dogs — particularly puppies and young dogs — have a lot of energy, and if they don’t get the chance to burn it off, destructive behavior is often the result.

If you’re annoyed at the holes your dog has dug, have headaches from barking, and have to replace pillows shredded into expensive fluff, your dog is probably not getting enough exercise.

These behavior issues cause many people to give up their dogs, even though they’re completely preventable problems. You know those “free to a good home, dog needs room to run” ads? They’re usually placed by people whose dogs don’t just need room to run; they need exercise they’re not getting.

Unfortunately, some people don’t think enough about exercise when selecting a breed, and they choose a dog who needs more than they’re willing or have time to provide.

How Much Exercise Does My Dog Need?

The amount of exercise that is “enough” depends on your dog’s age, breed, and health.

A ten-month old Irish Terrier puppy is going to need more than a five-year-old Whippet. A sight hound needs short bursts of activity; guarding dogs don’t need as much overall as sporting breeds who like to hunt all day.

Even within a breed, the need varies. A highly energetic eight-year-old Golden Retriever could easily need more exercise than a calm three-year old Golden. And geriatric dogs still need to go for walks — just shorter ones than they used to enjoy.

Generally speaking, a leashed walk around the block isn’t going to cut it. Most dogs need 30 to 60 minutes of physical activity a day. Your canine pal needs enough that they’re slowed down by the time you stop. 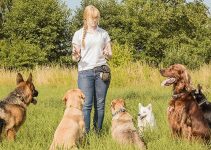 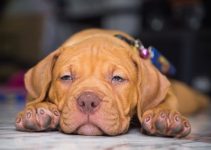